Providing therapeutic products for children with cognitive and physical disabilities

SUMMERVILLE, S.C. (WCIV) — She heard the word and didn’t hesitate. She made the purchase of a lifetime and now leads a legion of ladies all armed with a needle and thread.

Voices do carry, one a bit further than others.

“Three in the morning for weeks… Lord was waking me up. …I finally said, what Lord?”

Sue Desautels said God told her to buy a sewing machine. So, she did.

It was a simple $85 sewing machine from Walmart. Sue said it wasn’t long before the Lord began waking her up again, telling her to take it out of the box and use it.

Sue Desautels had never used a sewing machine, but she jumped into the spool head first. She first sewed something for her disabled grandchild.

Desautels said her granddaughter is motivation and inspiration at one time. She was once told she would never clap her hands, but now she claps every day. The Clap Your Hands organization was created in the child’s honor and provides therapeutic products for children with cognitive and physical disabilities.

The products are provided free of charge, making donations important. That’s another area where she says God has been involved.

“We’d be down to $3 in the checking account. If you want me to continue, got to have money. Four separate times, people came to my house, knocked on the door, wanted to give $100 in cash. Who does that?”

“One more thing for them to pay for, can’t afford it,” Desautels said. “Who suffers? Kids suffer. Not in this area. One hundred percent free, all the time.”

It’s a glaring need met with the pieces coming together one stitch at a time.

“Biggest majority of parents, they cry. They write me in tears. ‘First time my child has ever slept through the night.’ What kinds of payday is that? Best payday ever,” she said. 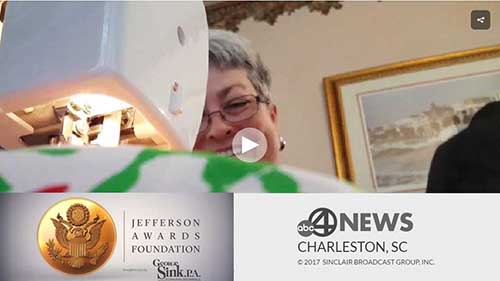 About the Author: Ron

I am Sue's husband and I am thrilled to support Clap Your Hands any way I can as Sue and her CYH TEAM are the best as they put so much energy and compassion in all they do for the children and their community.